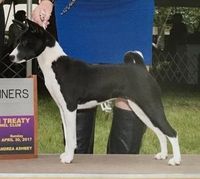 If you are interested in Temperament Testing here is what the set involves:

Description of the Temperament Test

The ATTS Temperament Test focuses on and measures different aspects of temperament such as stability, shyness, aggressiveness, and friendliness as well as the dog’s instinct for protectiveness towards its handler and/or self-preservation in the face of a threat.

Watch a video of the ATTS Temperament Test

Dogs must be at least 18 months old to enter this test. The test takes about eight to 12 minutes to complete. The dog is on a loose six-foot (6′) lead. The handler is not allowed to talk to the dog, give commands, or give corrections.

Failure on any part of the test is recognized when a dog shows:

Behavior Toward Strangers
Objective: To measure the dog’s reaction to strangers in a non-threatening situation.

Subtest 1: Neutral stranger
A stranger to the dog approaches the handler, shakes hands with the handler and engages the handler in a brief conversation, ignoring the dog.
The purpose of this subtest is to evaluate the dog’s reaction to passive socialization and the dog’s protective instinct.

Subtest 2: Friendly stranger
A stranger to the dog approaches happily and briskly, is very friendly to the dog and pets the dog.
The purpose of this subtest is to evaluate the dog’s active social skills.

Reaction to Auditory Stimuli
Objective: To measure the dog’s reaction to auditory stimuli and the dog’s investigative behavior.

Subtest 3: Hidden Noise
The handler/dog team approaches a hidden assistant who rattles a metal bucket filled with rocks and sets this bucket in the path of the team. The handler may encourage the dog to investigate the bucket only when asked to do so. The handler’s focus must be on the bucket, not on the dog.
The purpose of this subtest is to test alertness and curiosity.

Subtest 4: Gunshots
The handler stops at a designated marker with his/her back towards a well hidden assistant. The assistant fires three shots using a .22 caliber starter pistol (SHOT-PAUSE-SHOT-SHOT).
The purpose of this subtest is to measure the dog’s recovery response to a sudden noise.

Reaction to Visual Stimulus
Objective: To measure the dog’s reaction to a sudden visual stimulus.

Subtest 5: Umbrella
The handler/dog team approaches an assistant sitting in a chair holding a closed umbrella parallel to the ground at a 90 degree angle to the approaching team. When the dog is five feet from the assistant, the umbrella is opened. The handler may encourage the dog to investigate the umbrella only when asked to do so. The handler’s focus must be on the umbrella, not on the dog.

Subtest 6: Plastic Footing
Both the handler and the dog walk the entire length of a 15-foot by 6-foot clear plastic strip.

Subtest 7: Wire Footing
Only the dog will walk the entire length of a 12-foot by 3-foot unfolded exercise pen.

Self Protective/Aggressive Behavior
Objective: These tests collectively evaluate the dog’s capacity to recognize an unusual situation, its threshold to provocation, its protective instincts, and its propensity to realize when the situation becomes a threat.

Subtest 8: Non-Threatening
The handler/dog team stops at the designated marker. A weirdly-dressed stranger crosses the path 38 feet in front of the team.
The purpose of this subtest is to test the dog’s alertness to an unusual situation.

Subtest 9: Threatening
The weird stranger advances 10 feet towards the stationary handler in a threatening manner.
The purpose of this subtest is to evaluate the dog’s ability to recognize when an unusual situation turns into a provocation.

Subtest 10: Aggression
The weird stranger advances to within 18 feet of the stationary handler in an aggressive manner.
The purpose of this subtest is to evaluate the dog’s protective instincts.

The stranger is never closer than 10 feet from the dog. The handler’s 2 foot arm and the 6′ lead is added in for a total of 18 feet. Aggression here is checked against the breed standard and the dog’s training. A schutzhund trained dog lunging at the stranger is allowed, but if an untrained Siberian husky does the same, it may fail.